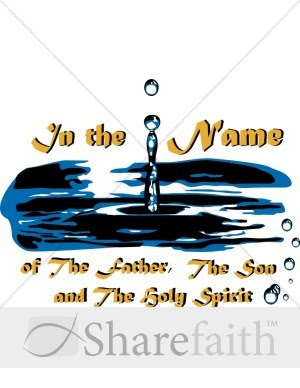 In the service tomorrow (Sunday) we will observe the ordinance of baptism. Recently we heard a message on the beautiful story that baptism tells.

Baptism is an outward sign of identifying our lives with Christ. It parallels the transformation of a sinner into newness of life with a reminder of Jesus death, burial and resurrection.

Jesus gave His life on the cross, becoming the sacrifice for the sins of mankind and putting to death the power of sin. He was buried and after three days arose victorious over sin and death.

The baptism of a new believer symbolizes the putting to death of the sinful man, rising in newness to a new life in Christ. Baptism is an outward evidence of the new creation, the old things of the man have gone and all things have become new. The believer is proclaiming obedience and testifying of a new life in Christ.

May we rejoice with the one being baptized tomorrow and celebrate their new life in Christ.

Therefore we were buried with Him through baptism into death, that just as Christ was raised from the dead by the glory of the Father, even so we also should walk in newness of life. For if we have been united together in the likeness of His death, certainly we also shall be in the likeness of His resurrection, knowing this, that our old man was crucified with Him, that the body of sin might be done away with, that we should no longer be slaves of sin. For he who has died has been freed from sin. Now if we died with Christ, we believe that we shall also live with Him, knowing that Christ, having been raised from the dead, dies no more. Death no longer has dominion over Him. For the death that He died, He died to sin once for all; but the life that He lives, He lives to God. Likewise you also, reckon yourselves to be dead indeed to sin, but alive to God in Christ Jesus our Lord. Romans 6:4-11
Posted by Joyfull at 10:03 AM