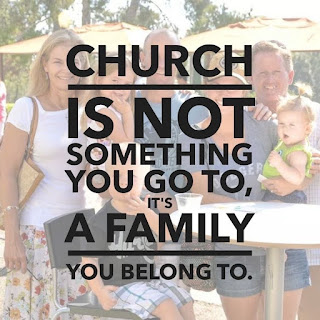 This week's menu for Family Ministries Meal is Spaghetti, Green Beans, Salad, Garlic Bread and Dessert.
Meal begins at 5:30 PM, ministries for the entire family begin at 6:30 PM. Don't forget the next few weeks are important for our children as they are practicing for the Christmas play.
Ladies Bible Study will continue through December.  Come be a part of Family Ministries!
Posted by Joyfull at 9:41 PM No comments:

We recently set aside a day to show our pastor and wife our love and appreciation. It was a day full of blessings and thankfulness for our leaders. A wonderful lunch was enjoyed by all along with a special cake to complete the sweet time of fellowship! 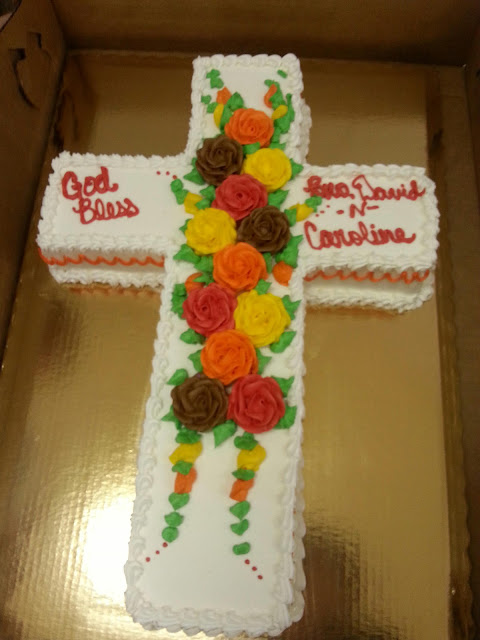 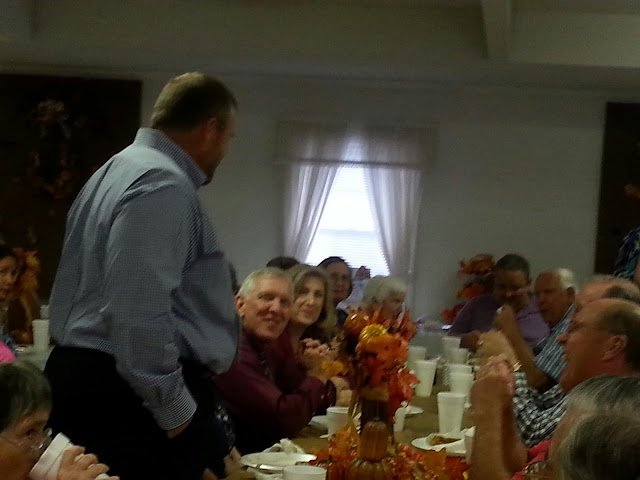 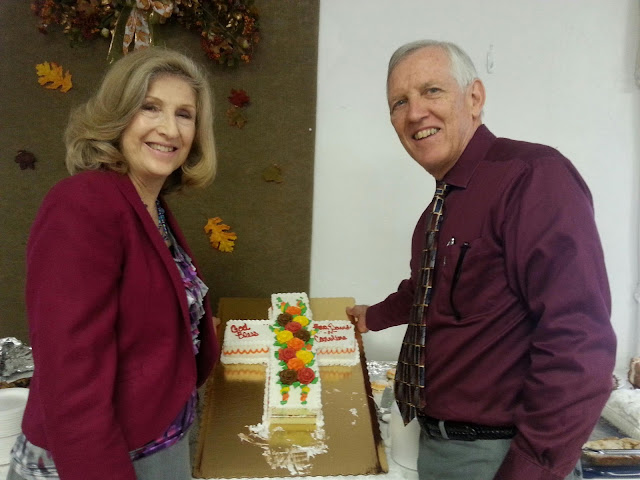 May we be encouraged today to give thanks to the Lord for all His blessings.  May we also be sensitive to know the needs of so many around us and extend our blessings and prayers to others. 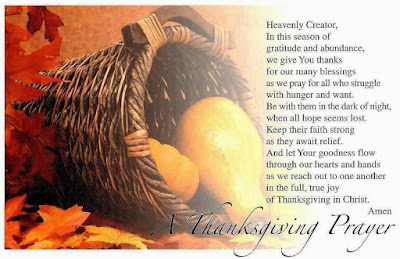 Posted by Joyfull at 7:00 AM No comments:

Look Who Came to Visit!!

Our church has heard about sweet baby Emma since before she was born! We rejoiced with Pastor and Caroline over her healthy arrival and love the pictures we have seen of her. Sweet Emma and her parents dropped by for a surprise visit recently! Isn't she a darling??!!! 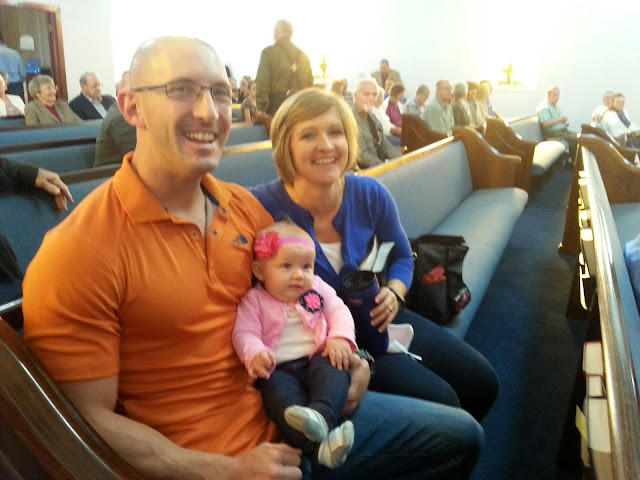 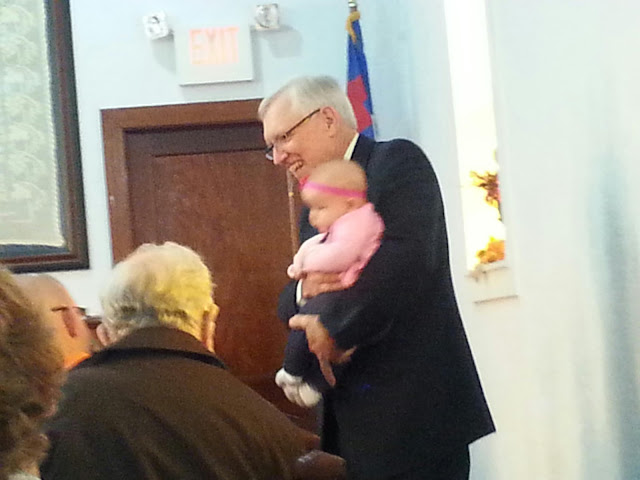 This week is the deadline to turn in the shoeboxes to all distribution centers.  Now the journey of the boxes will begin.  But the most important work is still left...prayer.

Here is a daily prayer schedule to pray for this ministry.

Sunday - Praise God for using shoe box gifts to share His love with children and families.

Monday-  Pray for each child who receives a shoe box.

Tuesday -  Each shoe box is a Gospel Opportunity; pray for an increase in shoe boxes this year.

Wednesday  - Pray for the physical and spiritual protection of all staff, volunteers, and ministry partners.

Thursday -  Pray that God will meet the physical, emotional, and spiritual needs of each child.

Friday  - Pray for the international churches as they teach children and families about Christ.

Saturday -  Pray for more opportunities for Samaritan’s Purse to meet the needs of children  such as water, food, and medical care.

Posted by Joyfull at 6:00 AM No comments: 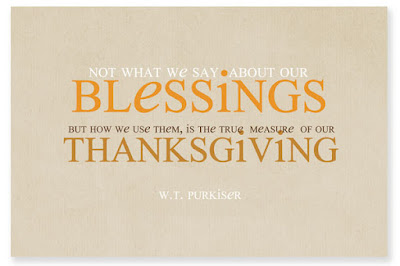 This week is Thanksgiving week and we will have a few changes to our mid week worship schedule. We will be meeting on TUESDAY night at 6:30 PM. There will be no services on Wednesday night. On Tuesday, we will all gather in the sanctuary for a time of thanksgiving.  There will be no youth or children's classes that night. Be encouraged to take some time in the midst of the busyness of the week to give thanks to the Lord for all His blessings!
Posted by Joyfull at 6:30 AM No comments:

We had lots of visitors to our fall festival...and it looks like they all had a great time! 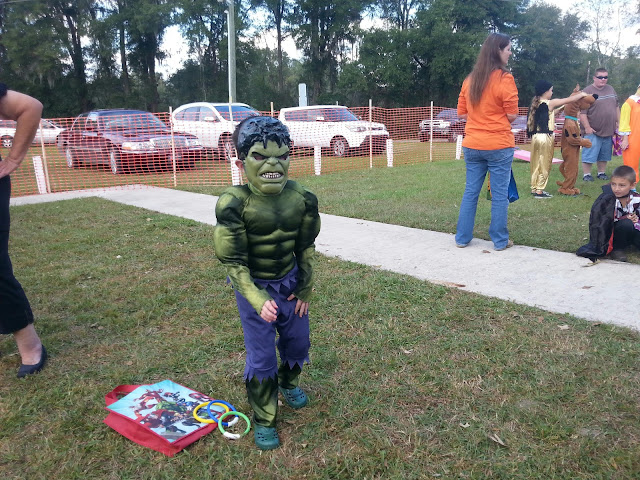 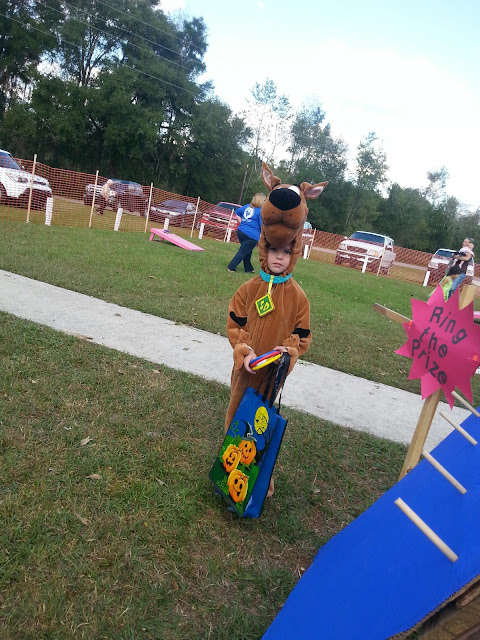 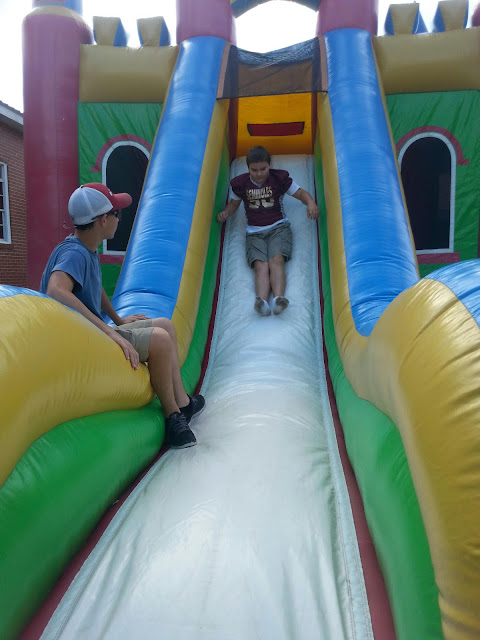 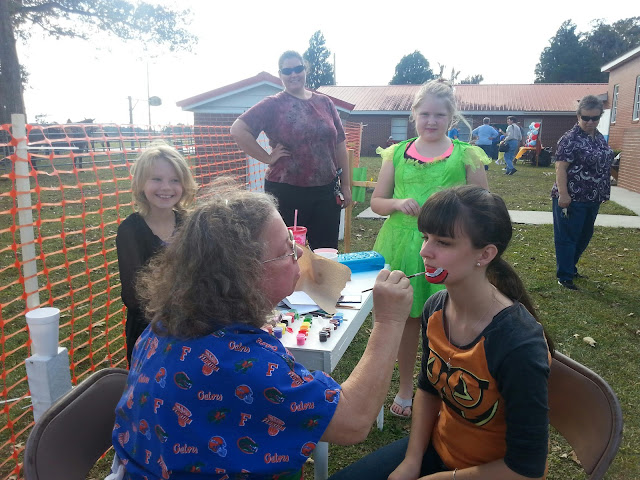 If you are packing a shoebox for Operation Christmas Child, the date to turn them in is November 22.  There are boxes available in the sanctuary along with instructions. Be encouraged to get a box this week, fill it with age appropriate toys and be a part of sharing the gospel message around the world.
"Operation Christmas Child does much more than just give presents. It also provides an opportunity to tell children and families about God's greatest Gift, Jesus Christ"
Franklin Graham
Posted by Joyfull at 6:30 AM No comments: 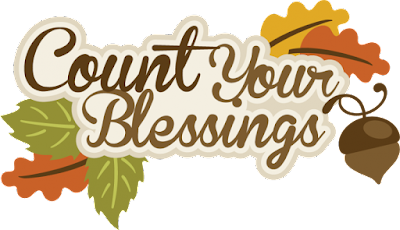 Our annual Church Thanksgiving Lunch will be on Sunday, November 22 immediately following the morning service.  The mean (turkey and ham) will be provided and church family is asked to bring a complimentary side dish or dessert.
Be encouraged to spend some time in fellowship and thanksgiving with the church family!
Posted by Joyfull at 6:30 AM No comments: 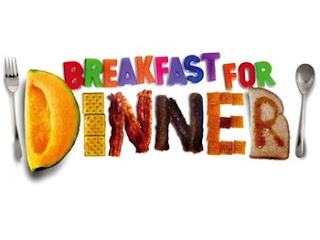 You won't want to miss this week's Family Ministries Meal!!  It will be 'breakfast for supper'!  We will be serving pancakes and sausage, ham and egg breakfast casserole and fruit.
Bring the family and enjoy a time of food and fellowship.  Family, fellowship, ministry are all a part of our mid week service.  Come be a part!
Posted by Joyfull at 6:30 AM No comments:

There was a fabulous turnout for our Fall Festival. Many children and families came out to play games, ride horses, enjoy a hay ride and receive lots of candy!! Here are a few pictures of the event. 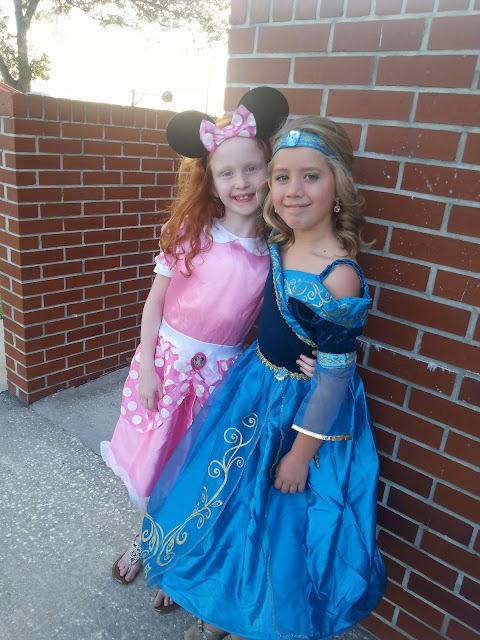 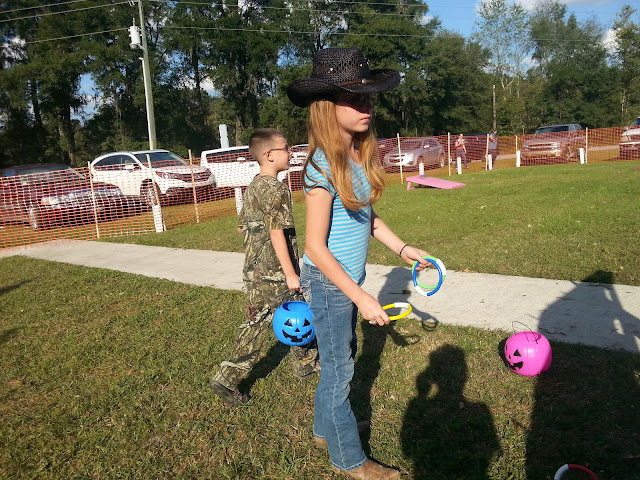 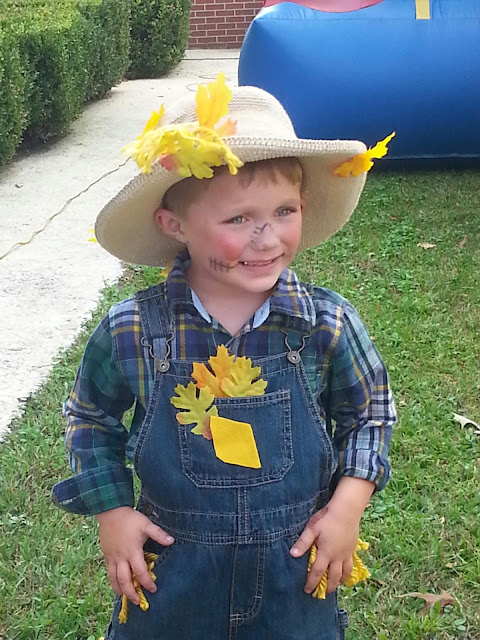 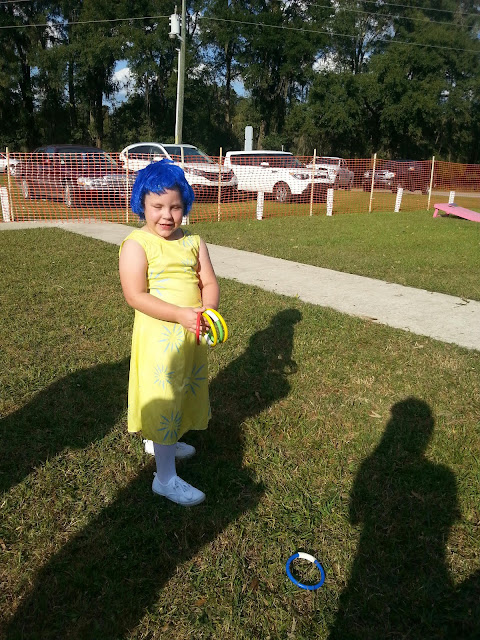 Funny for the Day 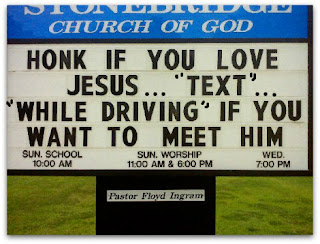 This minister just had all of his remaining teeth pulled and new dentures were being made.
The first Sunday, he only preached 10 minutes.
The second Sunday, he preached only 20 minutes.
But, on the third Sunday, he preached 1 hour 25 minutes.
When asked about this by some of the congregation, he responded this way.
The first Sunday, my gums were so sore it hurt to talk.
The second Sunday, my dentures were hurting a lot.
The third Sunday, I accidentally grabbed my wife's dentures... and I couldn't stop talking!

After the service a young couple talked to a church member about joining the church. He hadn't met the husband before, and he asked what church he was transferring from.After a short hesitation, he replied,"I am transferring from the Municipal Golf Course."
Posted by Joyfull at 6:00 AM No comments:

Six Principles to Survive the Storms in Our Lives 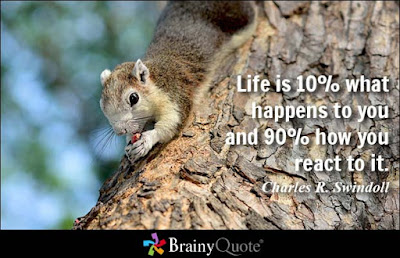 "Life is 10% what happens to you and 90% how you react to it."  Chuck Swindoll
Storms of life are a given.  Most of us have either just came through a storm or life, are in the middle of one, or are about to enter one.  But a recent sermon shared some encouraging ways to survive.
1.  Pay attention to your attitude while in the storm.  Every storm has a beginning and an end. It can be worked through.  Don't ever seek a permanent solution to a temporary problem.
2.  Get properly nourished.  Eat well and keep your physical strength up. Don't add more to an existing problem. Nourishing the body with proper food helps us respond better in crisis.
3.  Know that God is with you.  We belong to Him, He has us.
4.  Don't wallow in misery.  Be encouraged to press on in Jesus' name.  Strive for progress regardless of the situation.  Fix your eyes upon Jesus and keep moving.
5.  Obey orders. The storm winds bring changes -  in us.  God is able to use the force of the storm to fashion something beautiful and useful in us.
6.  Remove unnecessary baggage.  Storms cause us to evaluate what is truly important in our lives.  Don't' be afraid to throw overboard unessential baggage that weighs us down.
There will be an end to the storm, but while we are walking through it, Jesus is the anchor that holds us steady and is beside us the entire time.
Posted by Joyfull at 7:00 AM No comments:

12 Things To Watch and Listen For At Church...

Many of us are faithful church attenders.  We come, sit, hear, fellowship every week.  Faithfulness is good!  But church isn't designed to be a habit.  We serve a Living God, and sometimes we need to watch and see where He is working. Here is a portion of a fantastic artiilce with ways to watch and listen at church.

Watch and listen. May God give you eyes to see and ears to hear this weekend.
Posted by Joyfull at 6:30 AM No comments:

It's the simple joys of eating together as a church family, deepening the bonds of fellowship and gathering together in the midst of our busy week to worship God...together as a family!  Don't miss it! 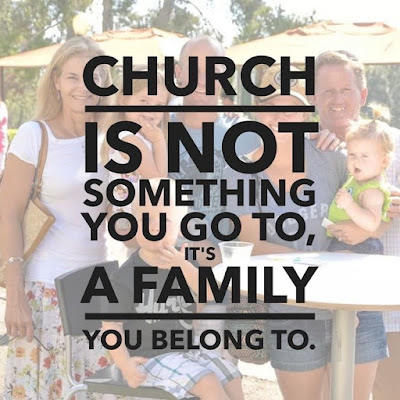 Posted by Joyfull at 6:00 AM No comments: 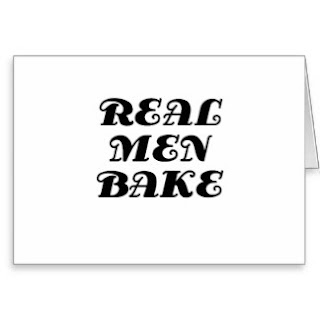 There will be a 5th Sunday Night Sing on November 29 in the evening service.  Be encouraged to pray about sharing a talent, testimony or a favourite Scripture.  These are always a blessing to hear!
Following the sing there will be a Men and Boys Cake Bake Off.  All men and boys are encourage to bake a cake and bring it to church November 29 by 4:00 PM. Cakes will be judged in age divisions according to taste and best decorated for a prize trophy!
Please mark the date, you won't want to miss this evening!!
Posted by Joyfull at 7:00 AM No comments: 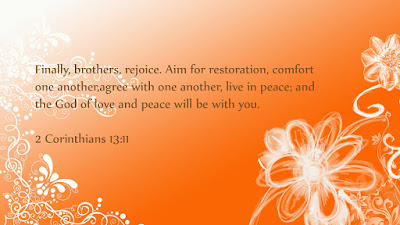 II Corinthians 13:11  "Finally, brothers, rejoice. Become mature, be encouraged, be of the same mind, be at peace, and the God of love and peace will be with you."

From Warren Wiersbe's Devotions for Encouragement and Maturity....very powerful devotion for the church.

"God is the "God of love and peace."  Can the outside world tell that from the way we Christians love and conduct the business of the church?
Like Christians today, the Corinthians in Paul's day desperately needed the blessings of grace, love and communion. The church is a miracle, and it can be sustained only by the miracle ministry of God.  No amount of human skill, talents, or programs can make the church what it ought to be.  Only God can do that.  If each of us believers is depending on the grace of God, walking in the love of Christ and participating in the fellowship of the Spirit, then we will be part of the answer and not part of the problem. We will be living this benediction and being a benediction to others.  Ask God to make you that kind of Christian.  Be encouraged and then encourage others.!"
Posted by Joyfull at 7:00 AM No comments:

Thought for the Day... 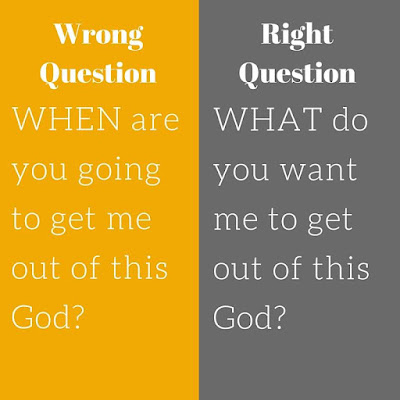 "Consider it a great joy, my brothers, whenever you experience various trials,  knowing that the testing of your faith produces endurance.  But endurance must do its complete work, so that you may be mature and complete, lacking nothing." James 1:2-4

Posted by Joyfull at 7:00 AM No comments: 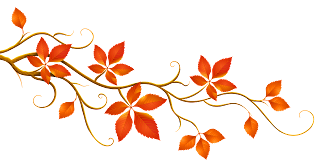 This week's menu for the Family Ministries Meal will be simple and good!

Grilled Cheese and Soup, Salad and Dessert.  Meal begins at 5:30 PM.  Come on out and enjoy a meal and bring the family for a time to grow in the Lord.
Posted by Joyfull at 11:46 AM No comments:

The Spiritual Discipline of Worship 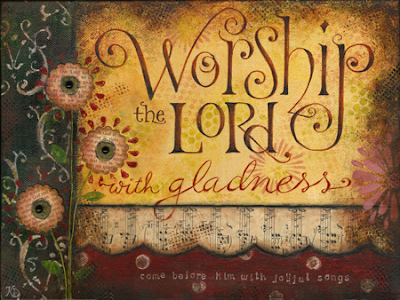 There is a current sermon series on Spiritual Disciplines.
Worship:  a reverence or awe of God.  It can be individual or corporate.  It speak of how we act or live in account to God.  It is the proper response of a believer to God.
Those who know God best, worship Him the most.
We worship Him for:

Eternal Truths:  His Holiness.  He is holy, set apart and pure. He is God Almighty, sovereign and supreme.  There is nothing outside His dominion.
He is Worthy:  He is the Creator and we are the creation.  Worship is practical and involves something.  What we say and do is action, it is not a feeling, but an expression of love to Him.
4 Things About Worship:

1. True worship involves purity.  The purer our lives are, the greater our worship.
2. It involves humility.  We recognize who He is, how great He is and bow in submission.
3. It involves surrender.  We acknowledge He is over all and we surrender all that we are to Him, our hope, our future, all we have and are.
4. Praise.  We praise God for who He is, what He is and all He is.
Posted by Joyfull at 5:49 PM No comments: